VFX & Animation AEAF Award goes to Australia: The Story of Us

The talented VFX & Animation team behind our 8 part series Australia: The Story Of Us has won a Bronze AEAF Award in the TV Series category. 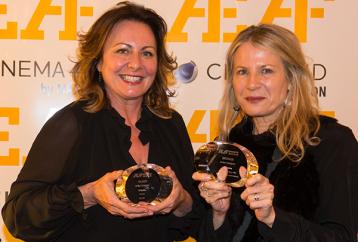 ATSOU VFX Supervisor Naomi Mitchell (pictured right) accepted the award on behalf of EQ Media at a ceremony held August 19, 2015 in Sydney. She is next to Teresa Hall (L) from Banana Farm VFX who picked up an Award on behalf of Blue Bolt.

The AEAF Awards highlight excellent work in character and VFX animation, visual effects, compositing and rendering, recognizing skill and creativity in commercial projects, short and long form productions and feature films from all around the world.

Australia: The Story Of Us is an 8-part series about the people, places and events that shaped the nation from the first footprints on our continent to the present day. The series was produced for Network Seven and aired in the first quarter of 2015.